I was later asked to upload a tracking number to prove that the 3 Amazon e-Gift cards (purchased by Ingo Groene) has already been delivered to him.

But i couldn’t upload tracking numbers since Amazon e-Giftcards are not tangible items that can be delivered by mail hence there was no tracking number for the transactions.

Below is a sample of an Amazon e-Gift card which i sent to Ingo Groene (Helmut Proske Crot). 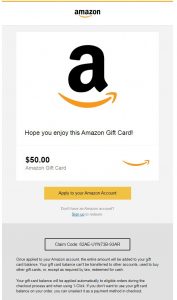 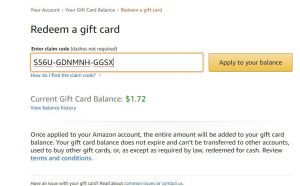 After Mr Ingo Groene issued payment for my Amazon e-Giftcards, i only sent him the claim codes of the $50 Amazon Gift cards to his inbox on Ebay; which was enough for him to redeem the Gift cards on US Amazon (i didn’t send the physical card to him)

Since i couldn’t provide tracking number (as the items were delivered via e-mail i.e. electronically), PayPal decided to reverse the payment. In other words the $282 sent by Ingo Groene as payment for the 3 $50 Amazon e-Gift cards was reversed (sent back) to Ingo Groene’s PayPal account.

Take a look at the screenshot below. 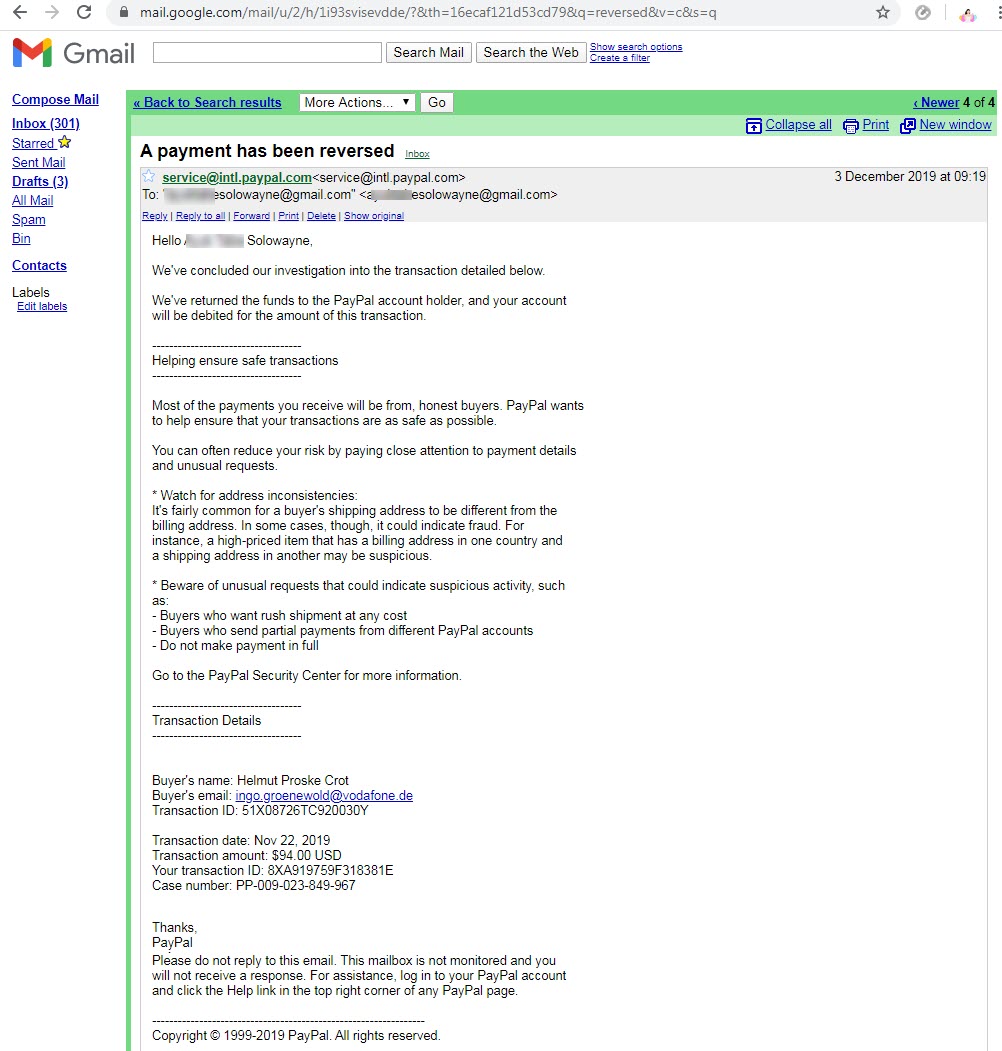 Simply put, the payment was refunded by PayPal against my will.

So i lost my Amazon e-Gift cards.

Please take a look at the screenshot below. 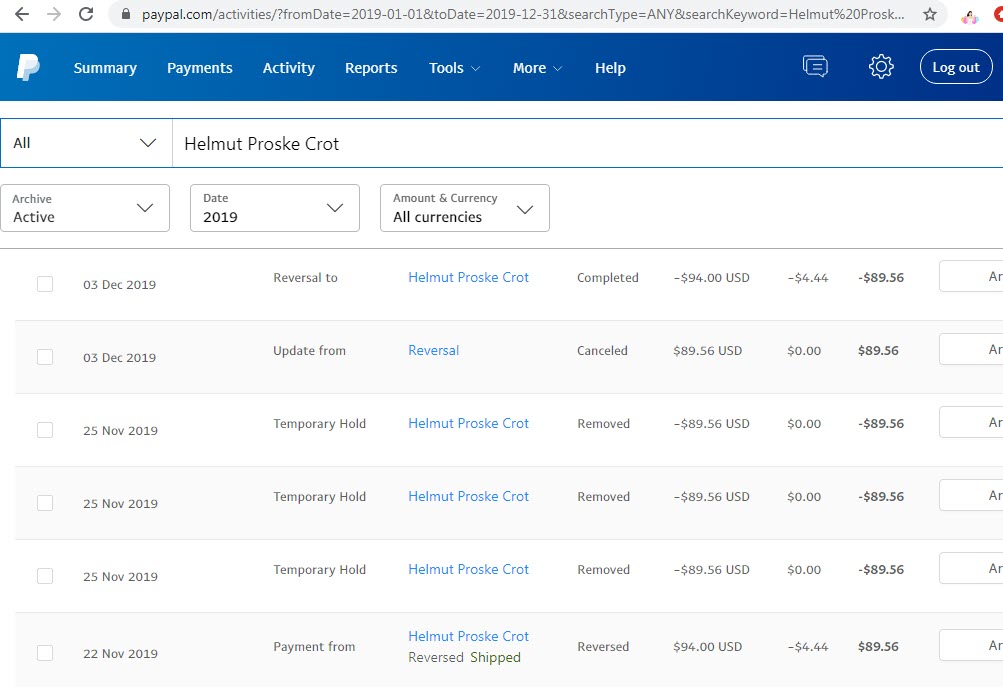 It should be noted that even before the payment was reversed, i had sent a message to Ingo Groene via his PayPal Email: ingo.groenewold@vodafone.de to inform him about the payment issue and to plead that he should help me to resolve the PayPal issue and He replied asking how we can resolve the issue and i told him what to do. Take a look at the screenshot below.

Mind you that, if Ingo Groene (Helmit Proske Crot) would have heed to my instruction, PayPal wouldn’t have reversed the Payment. 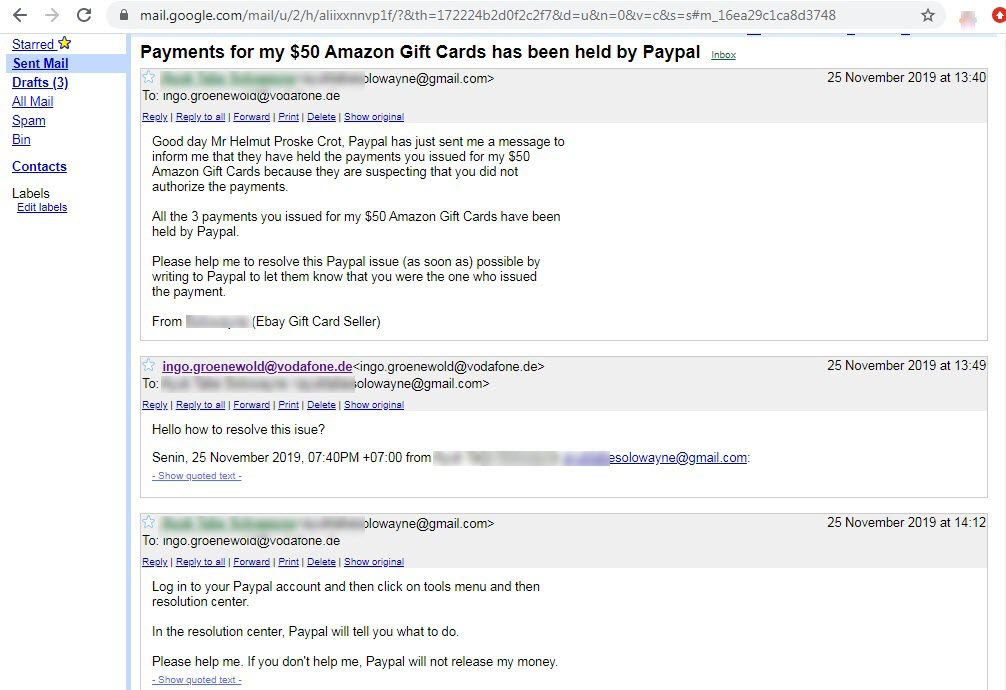 Since then he has never replied my emails.

For the past 12 months now (after payment was reversed),i have sent him tons of emails pleading that he should reissue payment for my Amazon egift cards but he has remained silent hence i decided to report this issue to Vodafone Germany; which i strongly believe Mr Ingo Groene is working for and using the company’s email to defraud people on Ebay. 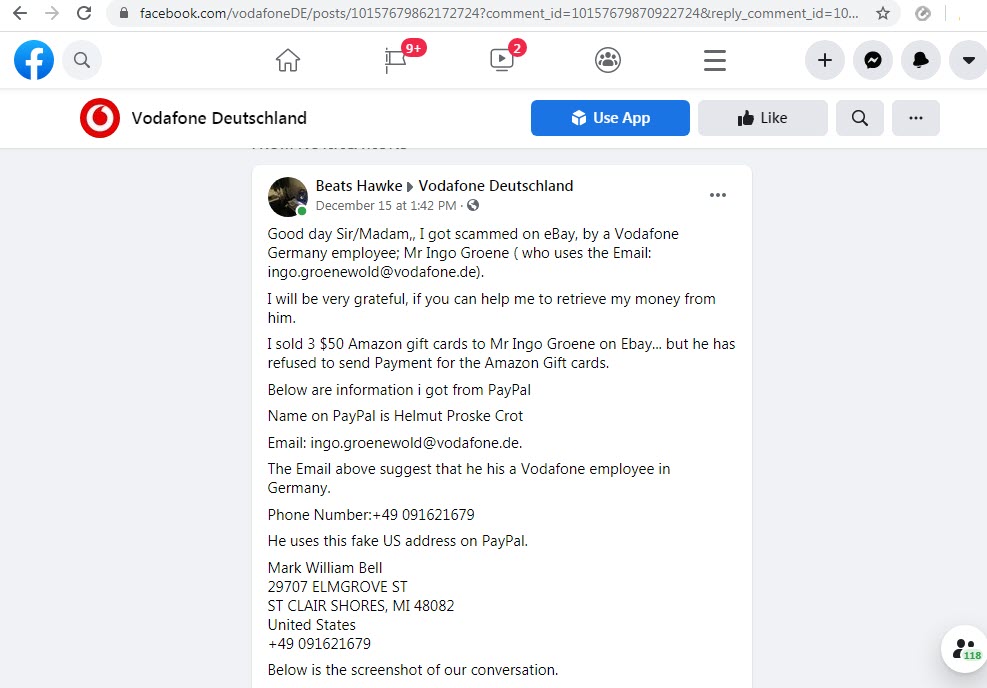 For those of you who don’t know, the gift card category on Ebay; is a risk category; which often attracts unscrupulous buyers.

Gift card scammers like Ingo Groene will issue payment for an e-gift card and later file a complaint to PayPal claiming that they haven’t received the purchased item or didn’t authorize the payment since they know that the gift card sellers won’t be able to upload tracking numbers. This will cause PayPal to reverse the Payment.

This is the method which Helmut Proske Crot (Ingo Groene) has been using to rip off cash from the Gift card sellers on Ebay.

You can read more about the Giftcard scams on Ebay via this thread on the Ebay forum if you wish to know how the gift card scam on Ebay works.

As a gift card seller who was mindful/conscious of the prevalence of Gift card scammers on Ebay and their schemes, i was extremely cautious when selling Amazon e-Gift cards.

To avoid being a victim of the aforementioned Ebay Gift card scam, I always ensure that i don’t sell my Amazon e-Gift cards to people who have little or no positive feedback on Ebay.

What prompted me to sell up to 3 gift cards to Ingo Groene (something i don’t normally do) was the fact that he had more than 20 positive feed backs on Ebay and in addition to that, i also noticed that his PayPal email had the vodafone.de domain name hence i was very convinced that he must be a trustworthy person. Little did i know that he was a wolf in sheep’s clothing.

It should be noted that after i sent the 3 Amazon gift cards to his inbox on Ebay, he left me three positive feed backs on Ebay, indirectly confirming that he has received and used the Amazon Gift cards… but he later filed a complaint to PayPal claiming that he didn’t receive the gift cards or authourize which prompted to put the payments on hold and subsequently reversed the payments.

It’s noteworthy that his account on Ebay has been suspended probably because other Gift card sellers on Ebay were also defrauded by him and must have reported him to Ebay management.

From the screenshot below you can see the feedbacks he left for my
3 Amazon Gift cards and if you click on his Ebay username you will notice that his account has been unregistered (suspended by Ebay).

Click here to view the page on Ebay where this screenshot was taken (if you are a doubting Thomas). 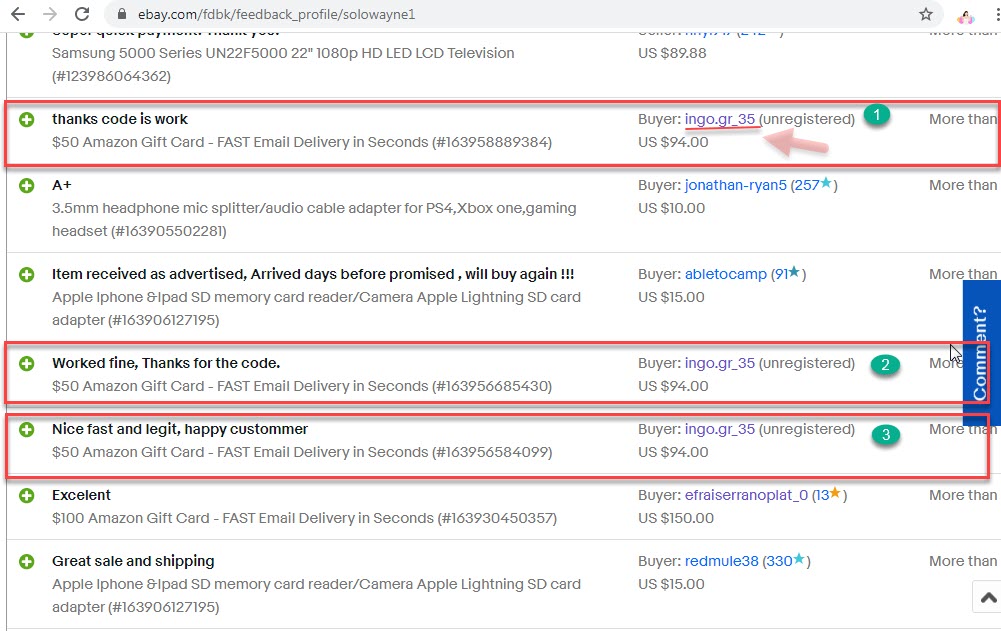 If you click on his Ebay username you will notice that his Ebay account has been suspended.

In case you are wondering if this story is true, check my feedbacks on Ebay and read what my customers are saying about me.

The screenshots below shows the payments from Ingo Groene (Helmut Proske Crot), which was reversed by PayPal. 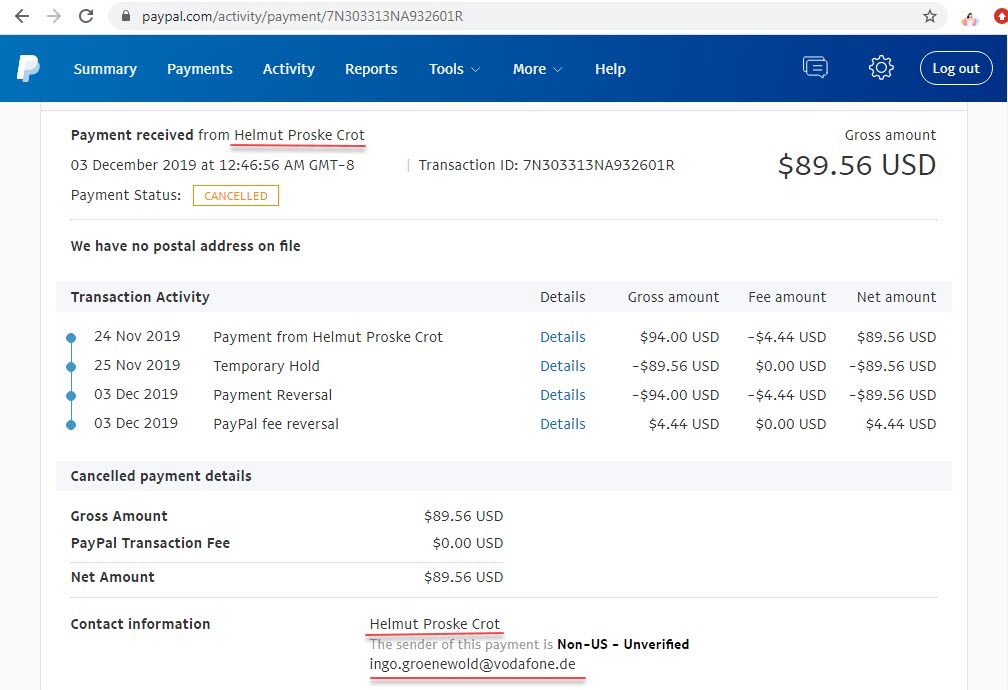 Update on this matter…

Vodafone Germany, just sent me a message to inform me that the Gift card scammer is not an employee and so they can’t help me to retrieve my money from the guy. 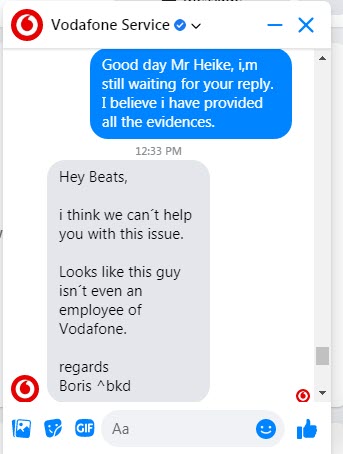 Below is my response to the message.

How is it possible that a guy who is using a professional email with @vodafone.de domain name, is not an employee of Vodafone

Has Vodafone Germany created a free Email platform (like Gmail) where anybody can create an email account???
I got scammed on Ebay by Helmut Proske Crot who is using the email:ingo.groenewold@vodafone.de on PayPal and Vodafone is telling me that the guy is not an employee.
Who is he???
If what you guys are saying is true, then there’s a high probability that Vodafone has been hacked by this guy. 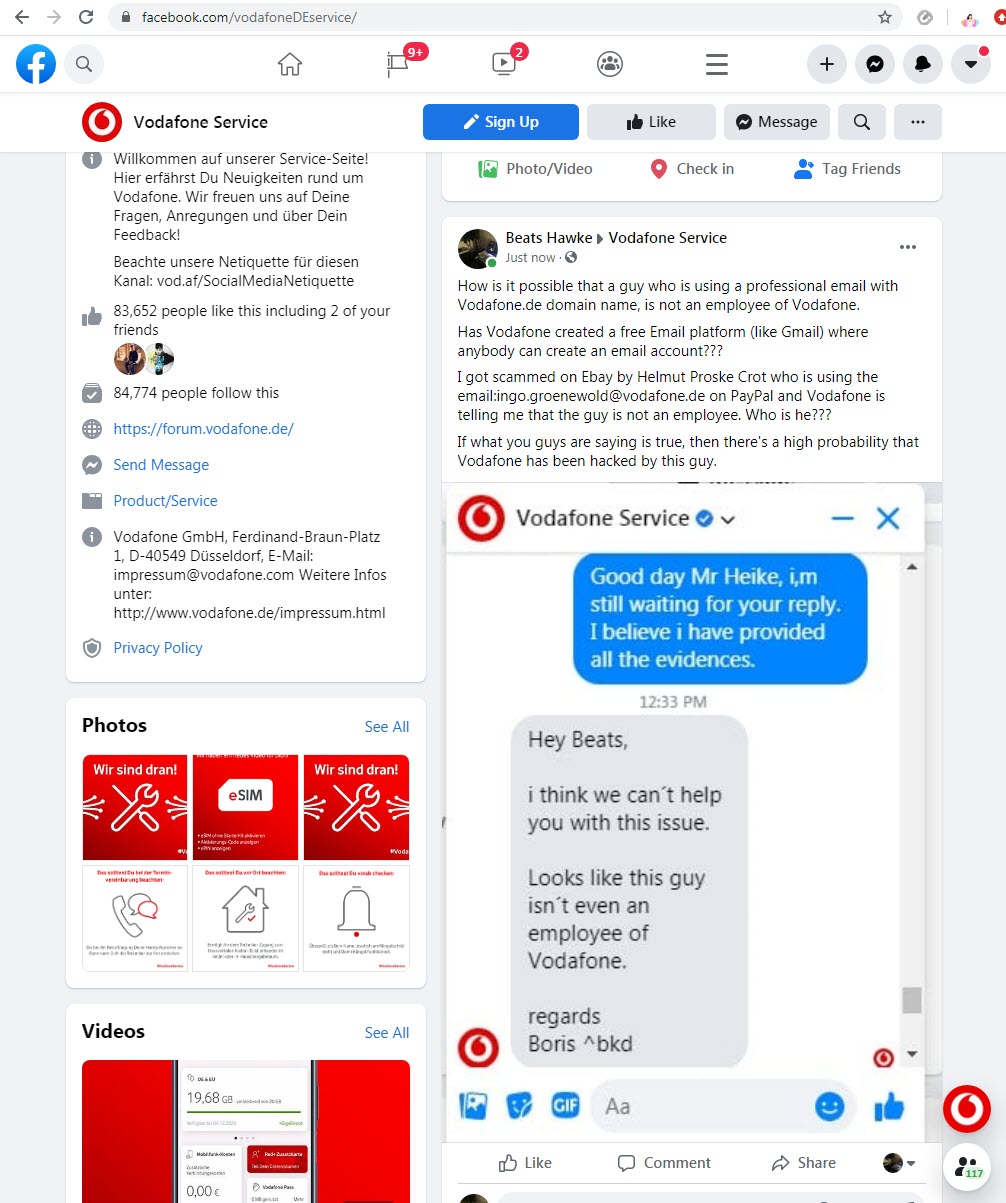 The screenshot below shows you the silly responses from Vodafone Germany customer service.