Some have even resorted to rocking bald head wigs in order to cover/mask their receding hairline or bald head. 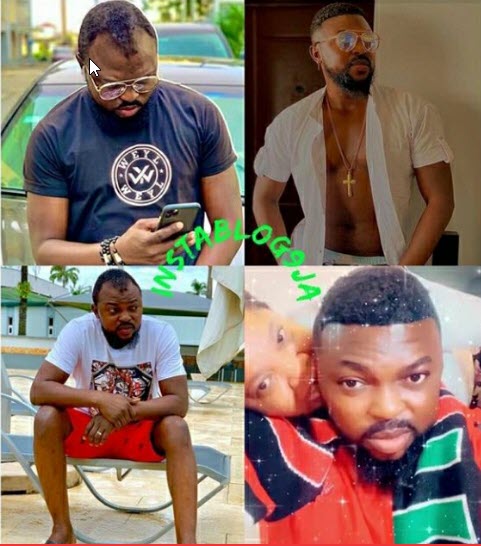 In Cameroon its very common to see people make fun of people with bald head and this makes some people feel bad about their hair.

A lot of men are obsess about their hair and how it looks hence every time they catch a reflection of their face in the mirror & when they look at old pictures where they still had all your hair intact, they feel really bad.

Unfortunately a receding hairline is a situation that is unavoidable for most men.

According to the scientists, 25 per cent of men will be affected by hair loss or a receding hairline by the age of 30, and the scientists adds that it is a hereditary condition caused by the action of a hormonal derivative of testosterone (DHT) on genetically sensitive hair follicles as Testosterone levels tend to peak between the ages of 18 and 35, and this is when the characteristic hair loss pattern is often experienced in men.

Apart from the hereditary factor, scientists also say stress, diet and other lifestyle factors can also play a part, but the most common cause of a receding hairline in men is androgenic alopecia – better known as male pattern baldness.

Unfortunately, some people start to deal with a receding hairline sooner than they would have liked causing them to feel uncomfortable among their peers who sometimes make fun of the receding hairline or thinning hair. 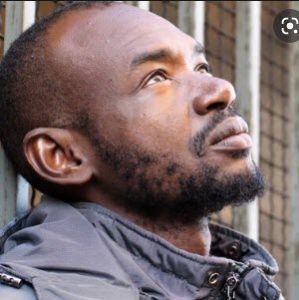 Yes, it can be very distressing for a young man to start experiencing thinning hair or a receding hairline, but it is a common wahala and not a respecter of men.

A few years back, award winning, American RNB Singer Ne-Yo, who has been noted for wearing hats in his music videos, revealed that he started wearing a hat as part of his signature look when he was a teenager, to disguise the fact that he had already begun to experience hair loss. 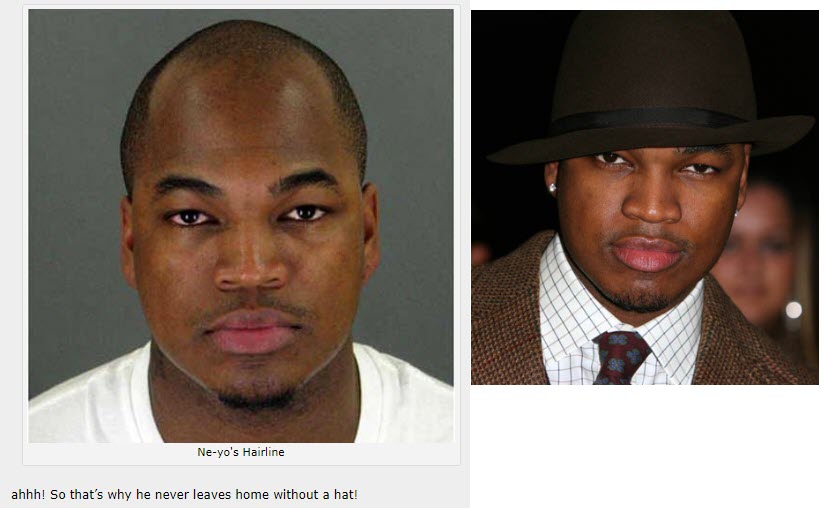 The platinum-selling R&B star, whose hits include ‘Closer’ and ‘Beautiful Monster’, said, “The men in my family start losing their hair really early on. My hair started receding when I was just 13. So that was why I originally started wearing hats. Then I got super-confident with who I am, but they were already part of my look, so the hats stayed.”.

Does this mean that all hope of getting your hair back to shape is lost???

The simple answer is No! 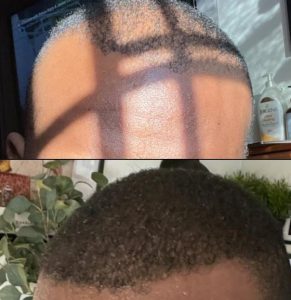 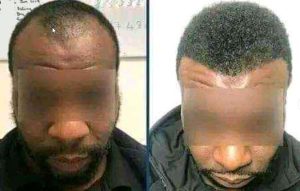 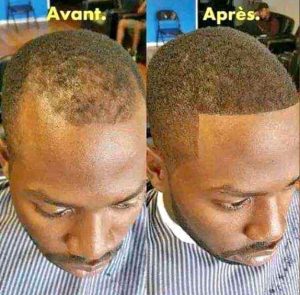 In fact, of recent Nigerian afro pop star; Davido shared a photo on the social media in which he flaunted his hairline was growing back to shape and he wrote; “My hairline coming back thank God 😂” 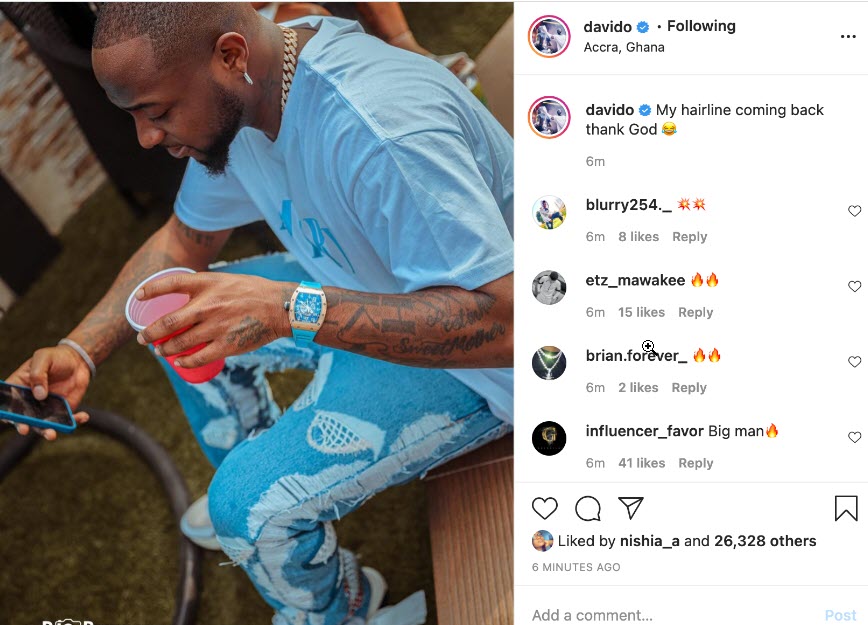 Apparently, the singer had a receding hairline which he wasn’t really proud of as he was frequently seen in caps in his music videos and Instagram photos.

Another video circulating on social media shows him feeling grateful to his barber who seems to have worked some magic on the hair of the global hitmaker as his hairline as his hairline is finally growing back to normal and he is hopeful it grows quickly to cover his forehead. 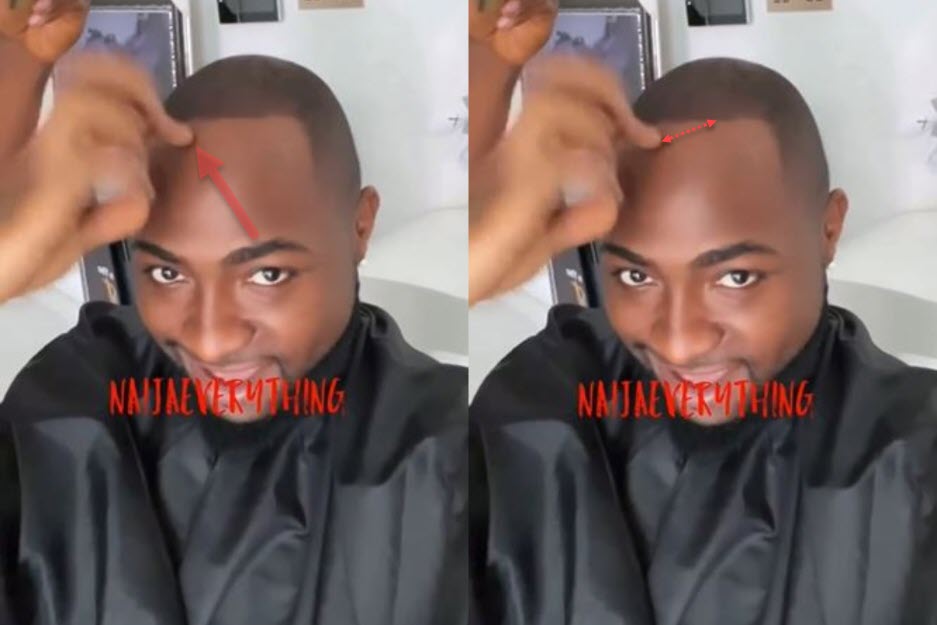 The male wig is gaining popularity among Cameroonian male celebrities day by day as many guys are desperately trying to manage the situation. Some have decided to shave completely bald to mask their thinning hair.

I know you might be thinking right now that could this be my fate??? NO!

Like i mentioned earlier, there are hair growth products that will help you fight receding hairline and balding.

For those of you who don’t know receding hairline marks the beginning of balding and if the condition is not addressed you will ultimately develop a bald head.

Don’t know what a receding hairline is???

A receding hairline is a gradual hair loss process where the hairline moves back across the head, giving you the appearance of a higher forehead. Most often, receding hairlines in men begin at the temples and progress over time. The result is M-shaped hair growth for the remaining hair on the top of the head.

Women also experience receding hairlines as well, but the phenomenon is typically more common amongst men and is often symptomatic of a wider condition known as male pattern baldness (MPB) and MPB causes progressive hair thinning which begins at the temples and makes the hairline gradually recede, eventually leading to baldness.

What Are The Causes Of A Receding Hairline?

Like i mentioned earlier, receding hairlines are often a symptom of male pattern baldness (MPB), of which the primary cause is genetics.

For instance Cameroonians who have MPB (receding hairlines) have inherited hair follicles with a higher sensitivity to dihydrotestosterone (DHT) , a hormone responsible for many of the male biological characteristics.

As we get older, DHT causes hair follicles to drastically shrink, which shortens their life span and limits their reproduction. When the follicles are miniaturized, the anagen phase (the phase responsible for hair growth) is shortened and the telogen phase (the resting phase when follicles lie dormant) is lengthened.

MPB is a hereditary trait and, contrary to popular opinion, you can inherit MPB from your mother’s side of the family as well as from your father’s. The primary gene responsible for MPB is located on the X chromosome, which is passed on by your mother. So even if your mother doesn’t suffer from MPB, she may still carry the gene and pass it on to you.

25% of men with male pattern baldness start experiencing the first signs of thinning before the age of 21 and by the age of 50, nearly 85% of men have experienced some sort of significant thinning.

In addition to genetics, there are other causes of receding hairlines as well, some of which include:

How Can I Tell If My Hairline Is Receding?

An easy way to check for a receding hairline is by combing your hair back over the crown of your head after you take a shower. Take a look in the mirror, and if you see an M-shape (which you didn’t always have), you very likely have a receding hairline. 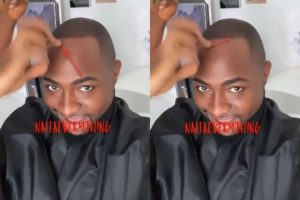 An experienced barber, especially one who is familiar with your hair, can quickly notify you when they notice that your hairline is receding for you to seek solution to it and prevent baldness.

And if you compare your old photos and recent reflection of your image in a mirror, you might notice a difference.

What Are The Stages Of A Receding Hairline? 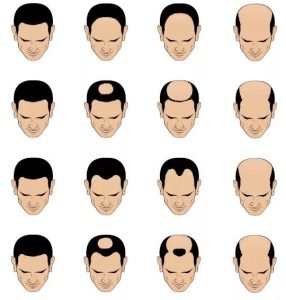 Receding hairlines occur in several stages. Typically, the hairline first begins to recede above the temples and gradually moves across the top of the head toward the back.

You may lose all the hair on the top of your head as this movement progresses, or you may be left with a thinning patch of hair in the center which gives you M-shaped hair growth, also known as a widow’s peak.

Some men maintain the hair on the back and sides of their heads after their hairline recedes, while others lose it all.

What Are The Treatments Available in Cameroon For A Receding Hairline or thinning hair in men?

A few years back, Receding hairline or thinning hair was a life sentence to low self esteem , but hair restoration advancements have changed this.

So when you notice your hair moving to the back of your head, don’t feel bad or wonder if your barber or nature is at fault. What you are experiencing is a receding hairline or hair loss and there’s a solution for it.

No matter which of the signs of balding you’re experiencing, there are ways to combat the process.

In this article, i will list 2 hair growth products for men and women which have been proven to fight receding headline or thinning hair in men. 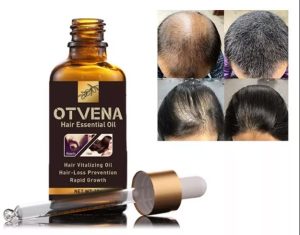 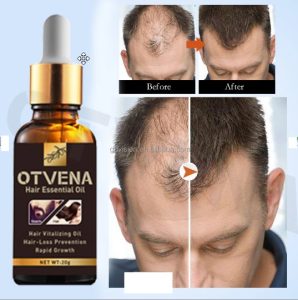 It is the number 1 solution in Cameroon for receding hairline or thinning hair (baldness). 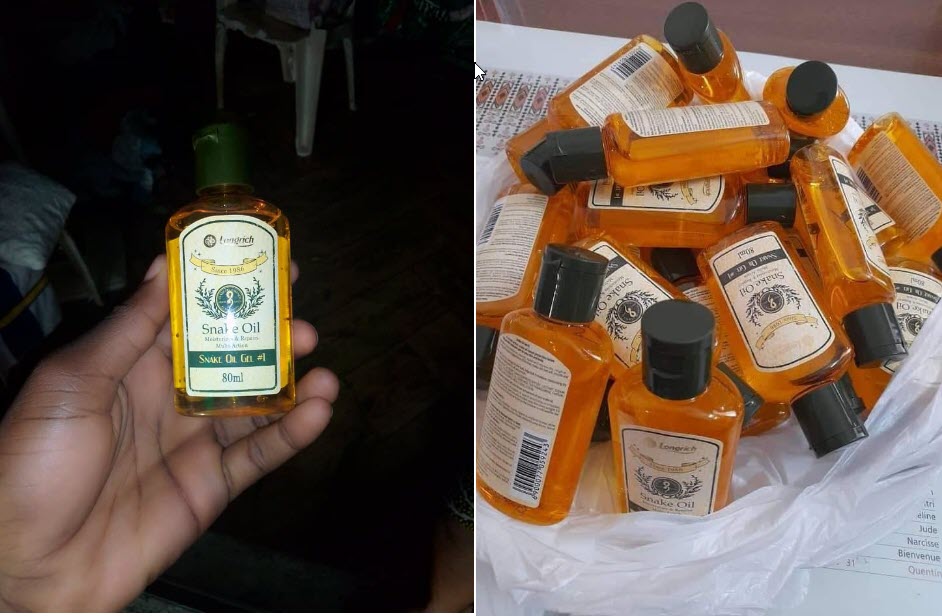 Longrich snake oil is also an effective hair growth product that has been tested and proven to help combat receding hairlines for both men and women.

If you’re in the beginning stages of balding or just noticed thinner hair, this hair growth oil will help restore your hair back to shape.

Changes to your hairline are often the first sign that you’re going bald.

Statistically speaking, two-thirds of men will experience hair loss (receding hairline) by the time they turn 35.

Nature is a vengeful mistress. She wants the majority of men to go bald. It’s a sad fact of life.

Of course, this means nothing to most men until they become part of the statistic.

Instead of wearing face caps and men wigs to manage the situation, why not just buy one of our hair growth products in Cameroon for receding hair line or thinning hair in men and get your hair back to shape.

NOTE: Not everyone walks down the same path to going bald. While many people will experience a receding hairline, others will encounter diffuse thinning. This occurs when hair loss targets specific parts or the entirety of your scalp. Our hair follicles grow in cycles, and when something interrupts this cycle, you will see visible thinning.

Unfortunately, many men don’t recognize what’s going on until they see their scalp. Just like with a receding hairline, though, you can compare pictures to be sure. Unless you’re 6’6″ tall like me and no one ever sees or photographs the crown of your head.

No matter which of the signs of balding you’re experiencing, those products will help combat it. 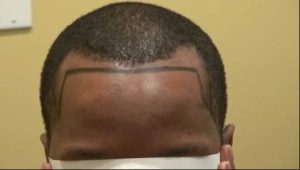 Remember receding hairline is an early warning sign which indicates that you are gradually going bald hence its important that you combat it on time.

WhatsApp us if you are interested in the recommended hair growth products for receding hairline in Cameroon for both men and women.

Copyright at 2023. Cameroon For Sale All Rights Reserved
↑