If you find this article relevant, then you’ve probably imported a TV from USA but can’t get it to work in your country and you must be in great panic right now wondering if the tons of cash you spent to import the TV has gone down the drain. You don’t have to worry about this as its simple issue you can easily solve.

How did i know this??? I have been in this same situation.

In, December 2019, i bought two Flat screen HDTVs from a US online shop (Ebay.com) from Cameroon with the help of a Freight Forwarding company in the US (myus.com).

I was very happy after both TVs arrived safely at my doorstep (without any damage) and in good/fairly used working condition i.e. both TVs powered on and i tested the HDMI, headphone jack, AV and USB ports…they were all working properly. I even connected my USB stick to the USB port of one of the TVs (a 22 inch Samsung TV) to play some of the movies in my USB stick in order to test the video quality of the TV…and video quality was superb (crystal clear).

However there was one thing i later noticed about the two American TVs, which got me scratching my head.

When i tried to hook up one of the US purchased TVs to a local Cable TV service to start watching TV, i realized that the antenna jack (RF) input on the 2 American TVs Weren’t compatible with the common PAL male connector used by my local cable providers.

Most cable TV providers in Africa, Europe and Asia, often offer a cable with a PAL male connector/plug (as seen in the screenshot below) which you need to connect to the Female PAL RF Coaxial antenna input found at the back/side of your TV in order to receive video signals (TV channels).

The picture below shows you the American F Type Female Jack found on one of the US purchased TVs. So there was no way i could connect cable to the American TVs. 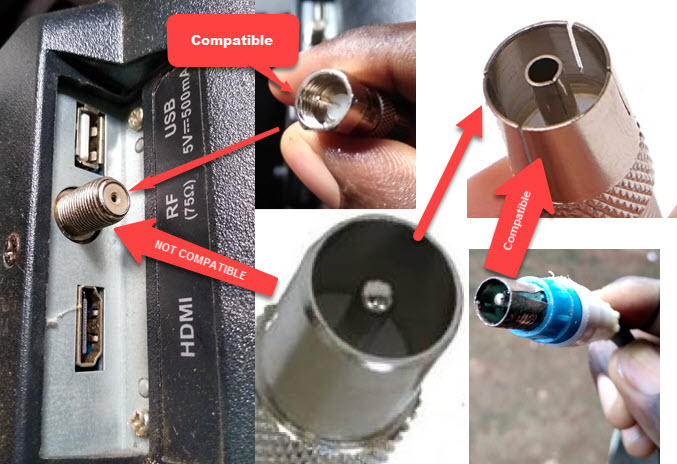 Since the common PAL Male Antenna (CATV RF) Coaxial connector used by my local cable provider wasn’t compatible with the F type female antenna jack on the American TVs, i thought if i could get an adapter which could convert the American F Type Female antenna Jack to the common PAL TV coaxial aerial female plug adapter, i would be able to solve this issue.

So i decided to carry out a little research to see if could find a product on Amazon, which match the aforementioned description.

After doing a brief Google search, i quickly found an F-type female to PAL coaxial aerial female plug adapter on Amazon (shown in the image below). 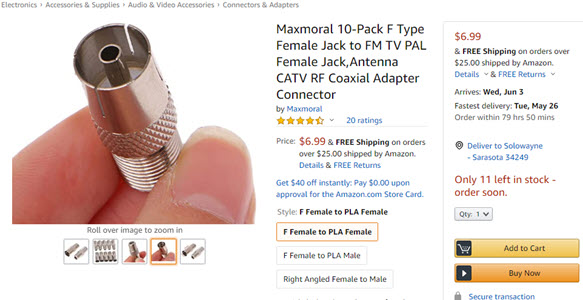 Without carrying out further research, i quickly placed an order for the adapter, hoping that it would bring solution to my problem.

The adapter has two sides (which i have labelled as side A and Side B).

I connected side B to the RF antenna input on my TV to get the result you see in the last photo. 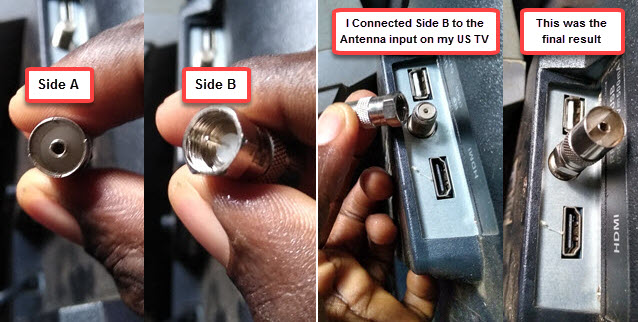 However, the adapter didn’t work…. 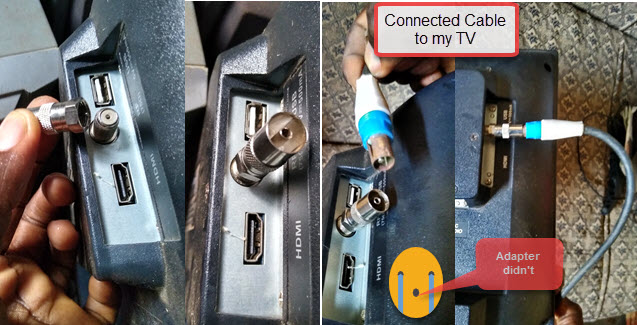 After i connected cable to the US TV, I ran a scan for channels but only received 10 channels (out of 80 TV channels offered by my cable provider).

The video quality of the channels i received were not good at all i.e. the pictures appeared hazy or distorted with NO colours (black & white only).What an insult!.

At this juncture, i became extremely angry.

I bought the two Flat screen HDTVs (for $700 including cost of shipping) from US, hoping to sell in my country (Cameroon) and make huge profit. Little did i know that i will experience this kind of issue.

To cut a long story short, i later went back to Google. This time i was very desperate and ready to browse to page 2000 of any Google search result just to get solution to a problem which has rendered my Two American Flat Screen TVs almost useless.

After 3 hours of research, i finally found the solution! However the solution came with a price tag.

For those of you who don’t, there are 3 satellite/broadcast systems used in the world today, for the transmission of Satelite video signals.

The 3 satellite/broadcast systems include: PAL, NTSC and SECAM.

For example if the broadcast system used in a particular country is NTSC, all TVs imported in to that country must support the NTSC broadcasting system in order to receive video signals from the satellite.

TVs which do not support the NTSC system will not be able to receive video signals except a converter is used to convert video signal to the supported broadcast system used in that country.

However there are certain TVs which support multi-systems i.e. they can be used in any part of the world but those TVs are rare.

It should be noted that the broadcast systems (used for the transmission of video signals) varies from one country to the other.

For example the broadcast system used in most African Countries, Europe and Asia countries is the PAL broadcasting system while North America (USA), Canada, Philippines, Jamaica and most South American countries support the NTSC broadcast system.

On the other hand, a European PAL TV will not work in the US, Canada and other countries which uses the NTSC broadcast system.

Samsung has published a list which shows the satellite/broadcast system used in all the countries in the world. You can visit the page on the Samsung website to know the broadcast system which is currently being used in your country, before importing a TV from USA OR before taking a US NTSC TV to any part of the world.

Simply put, PAL video doesn’t display on a TV which support NTSC, except a converter, is used to convert satellite signal to PAL. This explains why after i connected cable to my US NTSC TV in a PAL supported country, images appeared on my TV screen with no colour (mainly black and white). This was due to NTSC vs PAL incompatibility issue.

Since the NTSC broadcasting system is used in the US, most TVs used in the US (North American TVs) are set to support NTSC system and will not work (receive video signals) in countries which support the PAL system.

Most TV manufacturers, Like Samsung, LG, Sony, TCL, Toshiba, Panasonic etc will always program all TVs meant for the US market  to support the NTSC broadcasting system since the TVs were designed to be used in the US.

So if you import any TV from the USA to Cameroon, Nigeria, Ghana and other countries with the Pal broadcasting system, you will definitely need an NTSC to PAL converter in order to get the TV to work

Samsung TVs sold in India are designed to work with PAL broadcasting signals and an input voltage of AC 100 – 240V 50/60Hz. The TV will not work if it receives a NTSC or SECAM broadcast signal.

How to Use an American NTSC TV in PAL Supported areas like Cameroon, Nigeria, Ghana, India, Europe, Middle East etc

If you imported an NTSC supported TV from US in to a PAL supported country OR moved from US to PAL locations (like Europe, Africa, India, middle east)  you need to buy an NTSC to PAL broadcast system converter to get your US TV to work in a PAL country .

You can buy an NTSC to PAL Signal converter from Cameroononlineshop.com.

The NTSC to PAL converter perfectly solves the broad system incompatibility issue and works with any TV that has an HDMI input. Most TVs now have the HDMI input hence this won’t be a hinderance to anyone.

*** Easy to operate
*** Displays video in crystal clear 1080 resolution and there’s no audio delay (latency) unlike other NTSC to Pal converters that outputs video in lower quality (720p) with lips sync issue.
*** Comes with a fully functional remote controller that uses common AA batteries
*** The receiving signal is stable and reliable, and can receive and store 251 channel TV programs, which can meet the needs of the cable TV network in the future.
*** Support wide voltage range (110-240V) of switching power is adopted, high efficiency, low heating, safe and reliable.
*** Has HDMI and VGA options to support many TVs (You can connect the device to your US TV via HDMI or VGA out put)
*** Equipped with remote control shutdown, regular shutdown, and 10 minutes without signal automatic shutdown function.
*** Suitable for all TV sets with HDMI input port. Suitable for projectors, multimedia teaching, network engineering, etc.

How to use NTSC to PAL converter with an US TV

Its very easy to hook up an NTSC to PAL  converter to any TV with an HDMI input. Yes, it takes less than 3 minutes..

And all you need is an HDMI Cable. If you don’t have an HDMI, cable, you can still order one from cameroononlineshop.com.

Assuming that you have bought your HDMI cable, follow the procedures below to hook an NTSC to Pal Converter to your American NTSC supported TV.

2) After connecting the device to your TV, set your TV to HDMI mode.

3) Connect your Power adapter to the NTSC to PAL Signal converter via the DC 5V port.

6) Change the default language of the device to English or your preferred language.

7) Scan the TV for channels and when the scan is complete, you would be able to use your TV with no issue.

The product does what a person with NTSC TV living in a PAL country needs.I would recommend this to anyone and everyone if you are having the same problem.

Regarding the voltage incompatibility issue, you can purchase a voltage converter in most retail electronics stores to convert the voltage to AC 100 – 240V 50/60Hz.

If you are in need of the NTSC to PAL broadcast signal converter WhatsApp Us or simply visit Cameroononlineshop.com.